A Cynic, a sophist and a tCypriot in one!

Having been blogging these past few months on the Cyprus Mail website I made a friend, a tCypriot friend, a sophist and a cynic in one. I hope you will enjoy his comments, related to none other than our Turkeyish problem, as much as his contemporaries must have enjoyed Protagoras or Diogenis!

The photo depicts the statue of an unknown Cynic philosopher from the Capitoline Museum in Rome. Roman-era copy of an earlier Greek statue from the 3rd century BC.

If you are sipping coffee & have a few minutes available, scroll down to the bottom in order to move in chronological order. It turns out our sophisto-cynic is also a prophet, as he semi-predicted the tCypriot protests. Will his other predictions also come true?

Email ThisBlogThis!Share to TwitterShare to FacebookShare to Pinterest
Categories: Opinion 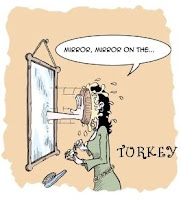 With Egypt’s Islamists scoring a crushing electoral victory over their secular opponents, governments and pundits alike are considering the likely denouement of the vaunted Arab Spring in the region’s largest country, Turkey. It is therefore worth noting some very troubling recent developments in the country that the Muslim Brotherhood and many in the West consistently tout as a successful “Islamist democracy” worth emulating.

Are we so gullible? 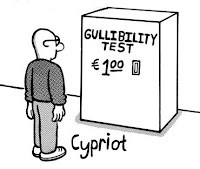 I don't understand. If Turkey meddles in Cypriot affairs so abusively, why don't we meddle in Turkey's affairs, if only to highlight her approach towards her own Kurdish ethnic minority? Some would say Turkey has a legal basis to be interested in Cyprus, given to her in 1960. But the truth is her responsibility, the responsibility of all three guarantors, was to protect the Republic of Cyprus, not destroy it. Turkey's meddling has been, to say the least, unwarranted. Why then not return the favor by asking her to apply her own majority-minority thinking at home before preaching Cypriots about the way things should be. Are we so gullible to accept passively Turkey's application of double standards? In my humble opinion the only way Turkey will be forced to make a move in Cyprus is if the world, and Cyprus must start such debate, calls Turkey's behavior towards her own citizens as diametrically opposing to what she preaches in Cyprus.
Posted by ΚΧΚ on 1:15 PM

Turkey's Kurdish leaders have a word for you! 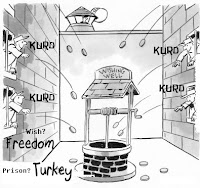 It is a well-known fact that nearly 5000 Kurdish politicians including 6 parliamentarians, 27 mayors, dozens of members of city council and executive members of BDP (Peace and Democracy Party) have been arrested. Occasional police operations are continuing since 14 April 2009.
Read more »
Posted by ΚΧΚ on 11:42 PM

Cypriot 2012 wishes with a healthy dose of truth

By Gregoris Gregoriou on Facebook at a 'Cyprus Forum' thread | Good evening ,İyi akşamlar, to all TCs 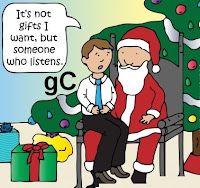 It's really interesting to read your ideas about a peaceful reunified Cyprus ...
You are always complaining about GCs being selfish , being chauvinists, being racists!!! And there comes the cliche" Turkish Cypriots have been suffering as from 1963 onwards".... Well my TC friends, if this is your idea about us , then I'm sorry but you know nothing about us at all! And indeed I'm sorry if you got the idea that I'm just another "chauvinist Greek Cypriot" because I'm not.
Read more »
Posted by ΚΧΚ on 8:35 AM

Email ThisBlogThis!Share to TwitterShare to FacebookShare to Pinterest
Categories: Posts I liked, Wisdom

With an expected huge dowry from its energy jackpot, the Republic of Cyprus has enhanced its regional position and is building new alliances, even as it refreshes older ones. Countries from the US to Russia and Germany are now courting the island republic, which just seven years ago was ostracised due to its rejection of the settlement plan proposed by former United Nations secretary-general Kofi Annan. In an interview with the Athens News, Foreign Minister Erato Kozakou-Markoullis outlines the importance of the Cyprus-Israel relationship, [reviews] the efforts towards a Cyprus solution and [talks about] the upcoming European Council presidency.

Email ThisBlogThis!Share to TwitterShare to FacebookShare to Pinterest
Categories: Press 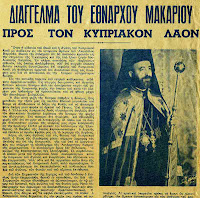 Makarios did not leave a memoir or diaries, so this 1974 interview with Italian journalist Oriana Fallaci stands as one of the more revealing published conversations with the archbishop and president. Regrettably, echoing the style of the times, much of the interview and the introduction focuses on trivial matters, and even gossip, an orientation one can only regard as an enormous waste of opportunity. But some of the interview provides useful insights into Makarios= thinking just four months after the coup against him and the Turkish intervention that divided the island.
Read more »
Posted by ΚΧΚ on 2:46 PM 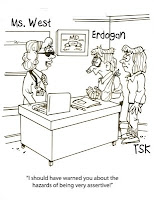 “We ... did not expect the way they [Turkey] interfere in Iraq,” Maliki said “And we do not allow that absolutely. We recently noticed their surprise interventions with statements, as if Iraq is controlled or run by them”
“If it is acceptable to talk about our judicial authority, then we can talk about theirs, and if they talk about our disputes, we can talk about theirs
“Turkey is playing a role that might bring disaster and civil war to the region and that Turkey itself will suffer because it has different sects and ethnicities.”
Maliki's attacks targeting Turkey undermine his own legitimacy | Sunday's Zaman 15/1/2012

Would you ignore me, mock me or fight me? 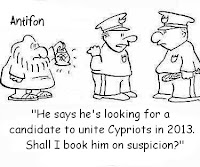 If someone could decode the Cypriot soul in 2004's 76% rejection of the monstrous Annan plan, thus uniting all of us, then we would all find the comfort zone to acknowledge that all Cypriot leaders have done their very best, and yes often not good enough, at the service of an extremely demanding and intelligent people that has been dealt a truly crappy hand by history!
Read more »
Posted by ΚΧΚ on 6:48 PM

The common will of Cypriots was captured in the resounding 76% of negative votes when rejecting the 2004 Annan Plan that aimed to serve interests outside the island. People from all walks of life and all political beliefs came together to offer their wisdom and common sense, against strong foreign influence that threatened them to succumb. Cypriots sent out the message that democracy, international law and human rights cannot be tailored or trimmed to suit others.

Tip of the iceberg 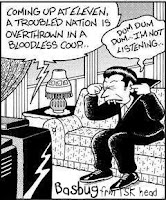 For those who understand Turkey the below press piece is a warning by the religious nationalists to the so called Kemalists [CHP, Ergenekon, TSK] to behave in the aftermath of Basbug's imprisonment else there is lots more where this came from! Cyprus is after all the TSK's most valuable prize.

"For example, during the 1974 Turkish intervention in Cyprus, the General Staff was able to hide the fact that Turkey sank its own ship because back then it was much easier to hide things from the public due to communication deficiencies."

Such details will become an avalanche as the Turkish "deep state" crumbles & the new religious nationalists fail to introduce democracy, authentic western democracy! Turks are so misinformed it is not funny. We don't have the luxury to wait for Turkey to become a normal state. The process will take decades. We must demand western justice for Cyprus today. 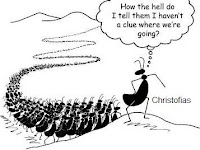 President Makarios attempted to fix the apartheid 1960 constitution with 13 proposed amendments. All hell broke loose. Now the Republic of Cyprus (RoC) discovered lots and lots of natural gas in its exclusive economic zone and opted to divide it into 13 plots! The RoC has elections coming up in 2013, not to mention than on November 30th of 2013 it will be 50 years since the 13 constitutional proposals. Last, if we find a solution in 2013 it will be 39, or 3 times 13, years after the 1974 catastrophe! Any triskaidekaphobics around?

I am looking for the person to lead Cypriots into the future. Any ideas? Why?