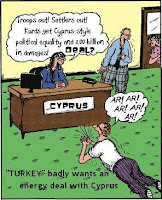 "Turkey" threatens Israel and others not to collaborate with Cyprus on energy matters. The truth is however that "Turkey" has no legal leg to stand on. Having said that, Cyprus could agree to pass a pipeline through
"Turkey" if all of the below conditions are met:
Ps. The 4th condition could be negotiated.
Posted by ΚΧΚ on 11:18 PM 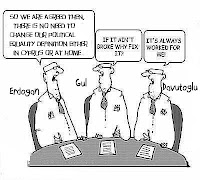 Those that ask of me to grant concessions in order for a just and viable solution to the Turkish-British-Turkish Cypriot problem of Cyprus should know that all I had to give I already gave, and that was when I compromised for an independent Cyprus state, against the overwhelming will of the majority Cypriots, its historic people, the Greek Christians, for union with Greece. If there cannot be a just independent state, without zones, apartheid, foreign intervention rights and baloney, then the only possible solution is the union of Cyprus with Greece. If 20 million Kurds managed to survive for over 90 years as citizens of an ethnic Turkish state then it is certain that 75.000 Turkish Cypriots will survive as European citizens of Greece.
Posted by ΚΧΚ on 1:44 PM

Are you a psycho?

Hey Turk, I see what you are saying. A Kurd cannot have political equality in "Turkey", and her language cannot be official & she cannot have a Kurdish education. Oh, I forget, she must get a full education in a foreign language too, Turkish, you know? Just like what you profess for the Turkish Cypriot minority! Wait a second. In Cyprus you demand since the 1950s the exact opposite for the ethnic minority! How can that be? Are you a psycho?
Read more »
Posted by ΚΧΚ on 1:27 AM