A Typical Conversation with a Turkish Cypriot 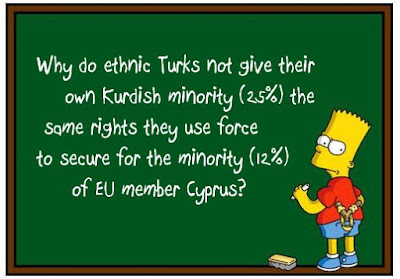 A typical conversation with a member of the Turkish Cypriot minority suffocating in her/his own version of reality:


Cypriot: The Greek Cypriot majority granted you the privilege of exclusive education in Turkish as far back as in 1960. Do you support exclusive Kurdish education for Kurds in "Turkey", who constitute 20-25% of the country's population?

TC: What does the Kurdish issue have anything to do with Cyprus?

Cypriot: Well, for one I am trying to establish the pricniples we are trying to uphold, regardless of the people involved. Second, Kurds are a community of the country you claim to depend on for your security and rights. So how that country treats it's own ethnic community is relevant, would you not think so?

TC: The Kurds have nothing to do with us. You stole our rights and now you are trying to find excuses.

Cypriot: I see what you are saying. But, hypothetically, if Kurds were to ask a charter like the one you achieved in 1960, would you support them?

TC: You are a fascist. I will not talk with you anymore.

Mustafa Akinci is NOT a Hypocrite! 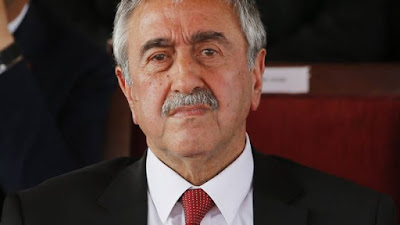 Mustafa Akinci, the leader of the Turkish Cypriot minority in Cyprus, strongly advocates:

Lobby for Cyprus statement on ‘talks’ to settle the Cyprus issue

Any settlement to the Cyprus issue must be just, sustainable and above all, in line with the rule of law. It must be for the benefit of all citizens and lawful residents of the Republic of Cyprus, which encompasses the entire island.

It should not be overlooked that the so-called ‘Cyprus problem’ has been caused by Turkish-inspired constitutional segregation, which has been aggravated by Turkey’s invasion, occupation, ethnic cleansing and colonisation of 37 per cent of the territory and 57 per cent of the coastline of the Republic of Cyprus.
Read more »
Posted by Κ. Χ. ΚΥΡΙΑΚΙΔΗΣ on 10:16 AM