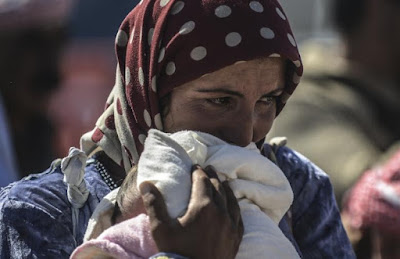 Since 2014, Yazidis in Iraq have been exposed to genocide at the hands of the Islamic State, which has led to their forced expulsion and exile from their ancestral lands.

ISIS has executed thousands of Yazidis and abducted a myriad others from the Sinjar area, raped them repeatedly and sold them as sex slaves. Nearly 200,000 Yazidis have been displaced in northern Iraq, where the large majority lives in refugee camps.

Forty-two years ago, similar crimes were committed in Cyprus by another occupying army, which is also a NATO member.

In the summer of 1974, the Turkish military invaded Cyprus in a bloody military campaign.

Turkey's Manipulation of Europe, Then and Now - MIDDLE EAST FORUM

Originally published on June 24 under the title "Holding the Balance of Power: Turkey's Complicating Relationship with Europe during the First World War and Since."

It is a historical irony that, for the second time in a century, Turkey is exploiting a major international crisis to manipulate the most powerful European nation into a hugely misconceived and self-defeating policy.

Having exacerbated the Syrian civil war by allowing jihadists of all hues to cross Turkish territory to fight his friend-turned-nemesis Bashar al-Assad, then spurred a massive humanitarian crisis by allowing hundreds of thousands of Syrian refuges (and assorted Middle Eastern migrants camped in Turkey) to infiltrate Europe illegally, President Recep Tayyip Erdoğan capitalized on Chancellor Merkel's recoil from her "open door" migration policy to extract substantial financial and political concessions from the European Union that, if fully implemented, will irreversibly change the EU's demographic and cultural identity.

Not so fast! Turkey was no great 'secular' state before Erdogan - WND

Using Cyprus’ own short-lived July 1974 military putsch (the Greek junta-supported coup had collapsed by [July 23, 1974]) as a pretext for long sought expansionist designs within Cyprus, pseudo-secular Turkey claimed its 1974 jihad invasion was a “peaceful action” that sought to “restore” Cypriot rights, territorial integrity, and security “without any discrimination toward the (Christian majority and Muslim minority) Communities.” But the July-August, 1974 jihad of Turkey’s pseudo-secular military regime, consistent with the devastating half millennial legacy of its Ottoman forbears’ campaigns, was punctuated by Islamic jihadism’s trademark “sacralized” brutality against non-Muslims: massacre, pillage, enslavement, rape, deportation (of infidels) and colonization (by Muslim replacements).