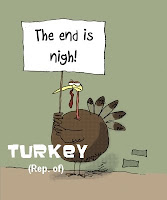 The landmass we incorrectly refer to as "Turkey" will disintegrate to some extend or another. Erdogan's choices, though intended to prevent the worst case scenario, are in actual fact expediting the inevitable.

I dare predict that the utter and complete failure, expected in 2013 sometime, to adopt a western constitution that addresses just Kurdish demands and introduces wider democratization reforms, will be a turning point in "Turkey" 's history & the beginning of a lethal spiral into unprecedented uncertainty as well as misery for all the constituent parts of the country.
Read more »
Posted by ΚΧΚ on 12:45 PM

Nothing will serve justice better than for a divided Constantinople (Istanbul) along ethnic lines to come about, with a Turkish and a Kurdish part, in line with prevalent ethnic Turkish Kemalist and/or "mild" Islamic thinking in Cyprus!
Posted by ΚΧΚ on 2:55 PM

Should Cyprus be proactive?

The 9th conference on EU, Kurds and "Turkey" ended in Brussels last Thursday (6/12/12). The question that should be on our minds is whether the Cyprus government can act on the conference's conclusions to promote peace in the wider region as well as bring some sense to Cyprus's Turkish-British problem. I list three of the declarations adopted which I find relevant:
Read more »
Posted by ΚΧΚ on 1:58 PM 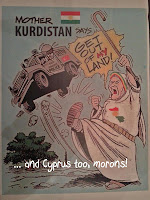 Your backward Ottoman ways, your incomprehensible Kemalist (another word for ultra-nationalism?) ways, your illusionary mild-Islamic ways, are a disgrace for free peoples. Please get out on your own in order to save whatever shreds of dignity you have left. To free your own people is your number one priority. You have absolutely nothing of democratic value to impose on others. Get out.
Posted by ΚΧΚ on 2:52 PM

Once a member, always a member?

The EU (and EU-17) is a political / economic alliance. When members were proven to disobey the rules & allowed their finances to drift, and as a result not to fulfill their obligations towards the union, they faced intense pressure from fellow members to put their economy in order. They were even ridiculed and many voices were heard for allowing for such members to be evicted from the group. New terms were concocted, such as 'Grexit', coined by The Economist, to refer to a possible Greek exit from the eurozone (EU-17) and/or EU.
Read more »
Posted by ΚΧΚ on 11:20 PM

Greek and Christian for millennia, solid albeit small 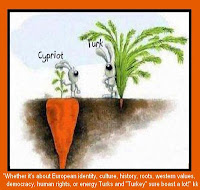 In 2004, the remains of an 8-month-old cat were discovered buried with its human owner at a Neolithic archaeological site in Cyprus.[2] The grave is estimated to be 9,500 years old, predating Egyptian civilization and pushing back the earliest known feline-human association significantly ...

In the Bronze Age the first cities, such as Enkomi, were built. Systematic copper mining began, and this resource was widely traded. Mycenaean Greeks were undoubtedly inhabiting Cyprus from the late stage of the Bronze Age, while the island's Greek name is already attested from the 15th century B.C. in the Linear B script ... 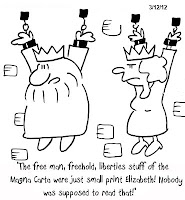 The Labour Party discusses " 'Northern' Cyprus should not be seen as a third world "country"!

Capitalizing 'North' I'm afraid is not enough to make a state! Ed may be young but he is not stupid. He knows that over 90% of now illegally occupied northern Cyprus belongs to its legal citizens, all Greek Cypriots, forcefully thrown out of their homes and towns & kept away for almost 40 years. These Greek Cypriots hold title deeds given from the very land registry created by the former British empire!

Incompetence by the International Crisis Group? 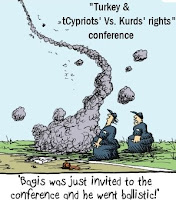 It is impressively puzzling that the International Crisis Group (ICG) analysts/ Director for the Republics of "Turkey" and Cyprus have not managed to-date to utter a single word about the glaring hypocrisy of "Turkey" and ethnic Turks by studying side by side "Turkey" 's espoused principles in Cyprus and those back at home.

A hypocrisy lasting since "Turkey" started meddling in Cypriot affairs decades ago about how ethnic Turks see their own double digit (circa 25%) ethnic Kurdish minority & the ethnic minority community of Cyprus, the 12% (18% at their peak) Turkish Cypriots, where "Turkey" wishes to impart its wisdom on majority-minority relations by the use of its military might!