Antifon: If northern Kurds are to remain within "Turkey", they will accept NO LESS rights than Turkish Cypriots, and "Turkey" ostensibly on their behalf, have been demanding in Cyprus, and Turkish Cypriots do not even have either a historical or ethical claim to a contiguous part of Cyprus as Kurds do in northern Kurdistan. When will ethnic Turks finally face this reality? Which reporter will break the ground first? Perhaps Nuray Mert.

Article by Nuray Mert: The main problem with Turkish politics concerning Kurds is that “Turks” cannot accept any prospect of Kurds ruling themselves. Turks in general and the present government in particular resist the idea of Kurdish “nationhood” and that is it. The Kurds may be latecomers but the Kurdish problem is a “national problem,” and first of all, this reality has to be acknowledged. Otherwise, Turkey’s domestic and regional politics concerning the Kurds will not lead anywhere positive.

Excerpt from UK TV programme, Britain's Grim Legacy, in which Turkish Cypriot terrorists' leader Rauf Denktash admits that Turks initiated the intercommunal violence between Greek Christians and Muslim Turks on the island in the 1950s. Denktash reveals that Turkish Cypriots planted a bomb to provoke the anti-Greek riots of June 1958. The incident which provoked the riots on 7 June was the explosion of a small bomb outside the Turkish Information Office (part of the Turkish consulate) in Nicosia, alleged to have been thrown from a passing car. Even at the time it was suspected that the Turks had planted the bomb to provoke the riots. 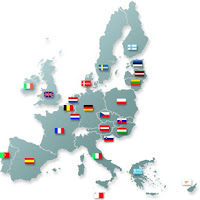 What about Cyprus? That is just one of the questions that Israelis and Europeans should be pondering now that the European Union has again decided that it should dictate Israeli border and security policy.

Last week the European Union issued a ban on funding of, or cooperation with, any Israeli institutions that
are shown to operate in what it calls the "occupied territories" – meaning the West Bank, or Judea and Samaria. Never mind that -- as Palestinian groups have already admitted -- the ban will affect Palestinians as much as Israelis. In its perpetual rush to find new double-standards to enforce, the EU has rushed straight in, regardless. 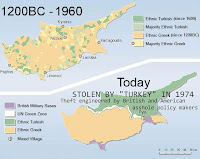 Cyprus, Greek and Christian for 3.200 and 2.000 years respectively. Its northern part stolen in 1974 by "Turkey", a theft engineered by British and American asshole policy makers. Help undo this absurd violation of historical, cultural and human integrity.

Sovereign State or Base?

The most succinct, insightful, caustic argument ever made, eloquently unveiling Britain's malevolent role in Cypriot affairs, unabated to this date as the British are desperate to secure their colonial interests in Cyprus through the apartheid concotion of a so called bizonal bicommunal federation, aiming to perpetuate the first version they envisioned in 1960, "upgraded" with geographical and ethnic division. The Cypriot "aboriginals'" patience is running out. 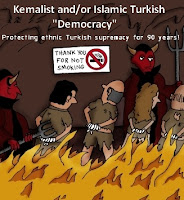 Hypocrisy is when you understand POLITICAL EQUALITY between majority and minority (circa 15-20%) one way at home and differently abroad, and you use military means to enforce your different
interpretations.
Posted by ΚΧΚ on 12:29 PM