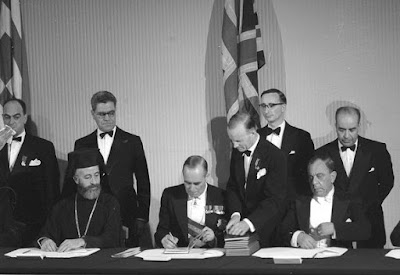 Why the public has had to wait so long to read some fairly obvious things is anybody’s guess. The papers that I excavated merely show that Britain knew full well that the Turkish Cypriots planned riots in Nicosia in the summer of 1958, and that the latter planted a bomb against their own people in order to blame the Greek Cypriots. Before commenting on the whole distasteful farrago and its relevance and implications for today, let us reproduce some extracts.
...
...
It is fairly well known that truth is the first casualty of war, although it does often emerge years later. Whenever one dares to speculate, one is often branded a ‘conspiracy theorist’, as I would have been, had I speculated that the Turks planted a bomb against themselves, without the documentary evidence that I have now provided. One day, perhaps we shall be provided with incontrovertible evidence that it was indeed also Turks who planted a bomb at their own consulate-general in Thessaloniki, although enough books by serious academics already point the finger at the Turks. And while on the subject of agents provocateurs, it is highly unlikely that Greeks or Greek Cypriots murdered a British housewife in Famagusta October 1958. [18] It could have been an American, a Turk or even an Englishman. One hopes that one day incontrovertible evidence will appear.

To conclude The moment that Britain began thinking of transferring its Middle East headquarters to Cyprus in early 1952, the die for dividing Cyprus was cast. [19] ‘All’s fair in love and war’, as some say, whether cynically or simply realistically. Britain and the US could not afford to countenance a truly independent Cyprus, given their fear of the Soviet Union. It is the same today, just as in the Ukraine, where agents provocateurs abound. One day, there, too, the truth will come out.

Source: Turkish bombs and riots in Cyprus: Handling the facts
Posted by Κ. Χ. ΚΥΡΙΑΚΙΔΗΣ on 1:17 AM