What about Turkey and Cyprus?‎ | Uzay Bulut 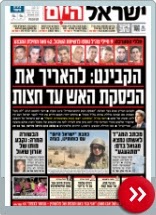 Uzay Bulut is a freelance journalist based in Ankara.

On July 20, two important incidents were reported by the Turkish Radio and Television ‎Corporation, the country's national public broadcaster.‎

The first report covered how Turkish officials, including Prime Minister Recep Tayyip Erdogan, were bashing Israel, the ‎‎"oppressor," for initiating a military operation in Gaza. Of course, there was no mention of this being a response to hundreds of rockets fired into Israel by Hamas.‎ It also did not come as a shock that the broadcast did not utter a single word about Hamas aiming at civilian areas in Israel, rejecting a cease-fire offer that had been accepted by Israel, and using its own people, including children, as ‎human shields. ‎
Read more »
Posted by ΚΧΚ on 4:21 PM

If we exclude Bizonal Apartheid, aka Bizonal Bicommunal Federation, simply because there is no precedent in the world where in a federation the minority rules over the majority, we have two options, one of which federalists will love: either a Hexazonal Federation based on Cyprus's six historic provinces or going back to fix 1960, by removing the apartheid clauses which led to the December 1963 ethno-communal fighting and the foreign meddling clauses which allowed for the 1974 catastrophic invasion by "Turkey" and the subsequent division, ethnic cleansing, cultural destruction and illegal colonization that continues unabated to this day.
Posted by ΚΧΚ on 6:41 PM

Giving Turkey a dose of its own medicine? | Jerusalem Post

Giving Turkey a dose of its own medicine? By YONAH JEREMY BOB  07/14/2014 Israeli NGO assists Cypriots in filing war crimes complaint against Turkey over occupation.

An Israeli NGO has assisted Cypriots in filing a war crimes complaint with the International Criminal Court prosecutor against Turkey over its occupation of Northern Cyprus. The complaint, filed on Tuesday and referred to as a communication, was made on the 40th anniversary of Turkey’s occupation of the northern part of Cyprus.

Legality Born of Horrid Illegality is a Recipe for Wider Disaster 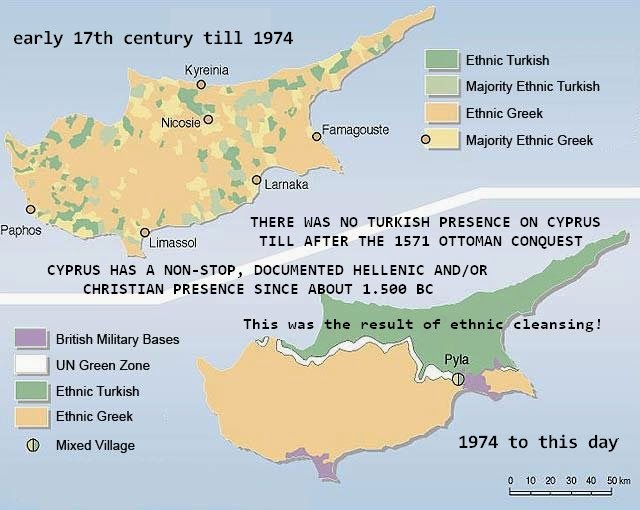 Allowing the creation of legality based on horrid illegality would set a precedent so dire that no UN state with any sizable ethnic minority shall be able to escape. Bankrupt British colonial thinking should NOT be allowed to wreck nations any longer. That's what some want. That's not what the Cypriot people want. And in Cyprus it should not matter what Brits or Turks or even the Turkish Cypriot Minority think, but instead what the historical overwhelming majority of Greek Christians.
Posted by ΚΧΚ on 4:33 PM

Since the Turkish Cypriot minority accepts the Turkish army for its protection it should be consistent and accept "Turkey" 's solutions vis-a-vis its own circa 22% ethnic minority community.
Posted by ΚΧΚ on 2:37 PM 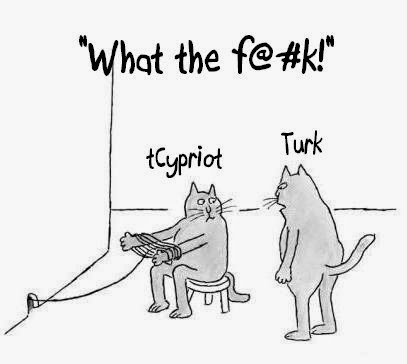 Every proposal submitted at the negotiating table by Turkish Cypriots is heeded by northern Kurdistanis (as well as by Europeans and Americans). After all, unlike Turkish Cypriots, Kurds of "Turkey" have both a historical and ethical claim on a contiguous part of the country that was defined by the 1923 borders, and today Kurds live scattered all around the landmass for which a better name would be Turkey-North Kurdia (or Turkey-North Kurdistan).

When a state's parliamentary system switches to a presidential one when its prime minister becomes president we can safely assert that such state is defunct.
Posted by ΚΧΚ on 10:47 PM