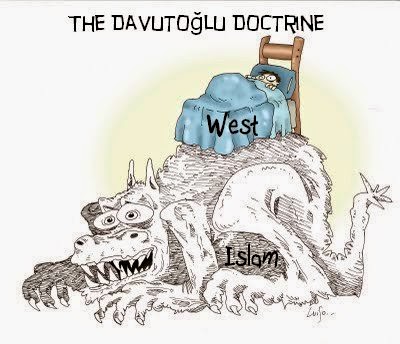 The Davutoğlu Doctrine for Islamic Expansionism - If America-backed British foolishness is permitted to prevail in Cyprus (bizonal apartheid) then an international legal precedent so dire will have been set that will sooner or later determine the fate of western countries with sizable Muslim populations. This constitutes one of two fundamental pillars of the Qatar-backed, Saudi-Arabia-backed Davutoğlu doctrine for worldwide Islamic expansionism, the other being "democracy" a-la-Turca, or Islamic majority rules Islamically and there ain't nothing anyone can do about it.
Posted by ΚΧΚ on 1:07 AM

Held by IS for 40 days, a Turkish photographer tells his story | Amberin Zaman


Held by IS for 40 days, a Turkish photographer tells his story by Amberin Zaman, ALMONITOR
Posted by ΚΧΚ on 5:30 PM

As Recep Tayyip Erdoğan ascends today to the presidency of Turkey, his hand-picked successor, Ahmet Davutoğlu, simultaneously assumes Erdoğan's old job of prime minister. What do these changes portend for Turkey and its foreign policy? In two words: nothing good.

Choosing between freedom and Islamism

Choosing between freedom and Islamism, August 26, 2014 , by Uzay Bulut

This excerpt is from the preface of the first edition of the book "This is Religion," by Turan ‎Dursun.‎

Let me see if I get what Turks and their puppets are saying. When a militarily powerful nation decides to attack a weak nation, divide it, occupy part of it, ethnically cleanse it, destroy its cultural wealth & colonize it, we are supposed to applaud the result as "peace"? Perhaps there is confusion between the words 'peace' and 'piss' by the gentleman.

The whole truth and nothing but the truth

1960, the Cyprus Republic charter which was never approved by the Cypriot people, was Apartheid (Click here if you don't believe me). 2004, the infamous Annan plan rejected outright by the Cypriot people, was a proposal for Bizonal Apartheid, encompassing 1960's Apartheid premise plus the "realities" post illegal invasion, division, ethnic cleansing, colonization of 1974 and afterward (Click here if you don't believe me). Current talks are about Bizonal Apartheid as well. The Brits introduced Apartheid. Brits allowed division, facilitated ethnic cleansing & introduced Bizonality. It is their Legal Duty to remove Bizonality and their Ethical Duty to remove Apartheid. Then, and only then, perhaps they can keep certain privileges in Cyprus. Time-limited. And with the Cypriot people's consent.
Posted by ΚΧΚ on 1:07 PM Insulting other nations on TV might not be a method of boosting one's presidential election ‎campaign in most countries, but in Turkey, this method seems to work, at least for Recep Tayyip Erdogan.‎

When he was asked of his earlier discriminatory statements during a live interview, five days ‎before the August 10 presidential elections, Erdogan said:

‎"One of them came and said I was a Georgian. Then another came up and, I beg your pardon, ‎called me uglier things, saying I was Armenian."‎ 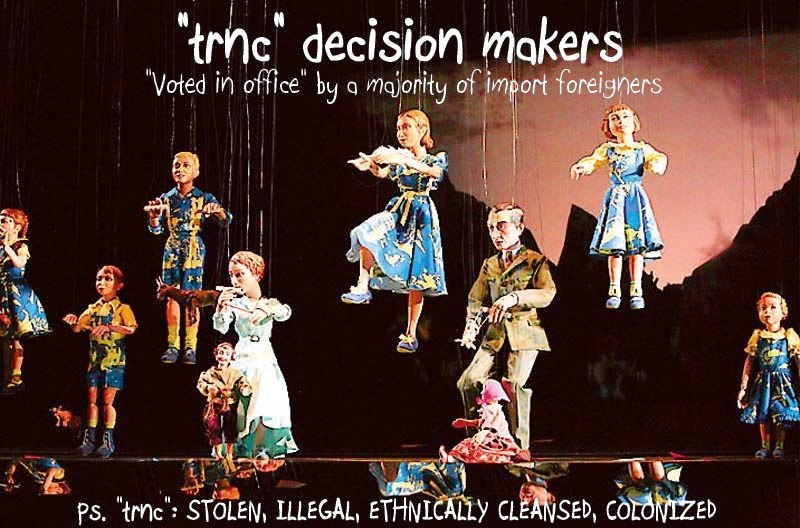 The Proof is in the Prophet

Hardly any mother on this earth would hesitate for her children to be taught the life of a person that lived the identical life of Christ. That in my mind has to be the quintessential difference setting Christianity and Islam apart. For nothing Christ did or said contained the tiniest shred of malice.

The contrary is not true. The details of the life of the man who introduced Islam to humanity would be at best X-rated in the movie theaters of the world, probably banned. If we accept as pure, the closest to divinity we may come on earth, the collective conscience of earth's mothers, Islam then has to be false. A false religion that makes false claims.

Good morning to a new era! The supporters of Recep Tayyip Erdoğan call it the dawn of the “New Turkey.” Indeed, the presidential election marks a radical change and has started the process of a completely new political system that will culminate in a “People’s Republic.” Erdoğan supporters use the term of “nation” instead of “people,” since right-wing politicians always avoid the left-wing term of “people” and prefer “nation” (millet in Turkish). But millet has a slightly different meaning than nation in Turkish, because it refers to “real members of the national community,” according to which, millet can exclude alienated Turks like secularists, those who live a liberal life, cosmopolitans, and all who do not care for “our own values.” It is how the term millet is being used nowadays in Turkey.

Ever since Israel's military operation in Gaza started, Turkish officials and institutions ‎have been in a constant competition to condemn or even curse Israel.‎

On July 18, the Foreign Relations Commission of the Turkish Parliament issued a joint ‎declaration in which all political parties in the parliament condemned Israel:‎ "We vehemently condemn the attacks of Israel against the Palestinian people, which do not ‎comply with the concept of a legitimate state and which trample on international law and ‎the most basic human rights and [we also condemn] its ongoing massacre in which civilians including children and women are indiscriminately killed."‎

What about Turkey and Cyprus? Part 2 | Uzay Bulut


For part 1, see "For What about Turkey and Cyprus?"

Turkish Prime Minister Recep Tayyip Erdogan said in his presidential election rally in the southern ‎province of Mersin that Israel will be tried by an international court if it continues to act with its ‎current mentality. "We will see that. As Turkey, we will struggle for that," he added.‎

Ironically, when the European Court of Human Rights convicted Turkey in May of this ‎year for its crimes during the 1974 invasion of Cyprus, Turkish Foreign Minister Ahmet ‎Davutoglu said that Turkey would ignore the ECHR ruling to pay compensation to the ‎Republic of Cyprus.‎