Who are the Cyprus hardliners? 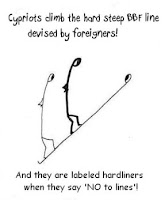 Hardliners are those who support the bogus BBF (bi-zonal, bi-communal federation) basis that aims to formalize the division of an illegal war and an unwise self-segregation policy. Those who oppose BBF, and support freedom and justice instead, oppose any lines, BBF, green or otherwise. No divisive hard lines ever existed in Cyprus in its almost 3.500 Greek and almost 2.000 Christian uninterrupted, recorded history. So, let's think again before we label the anti-BBF camp as HARD-LINERS. If anything, they are NO LINERS!