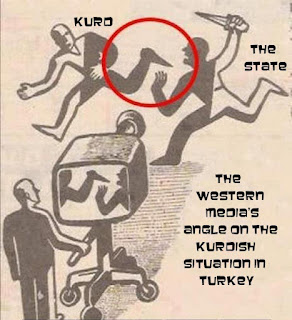 In anticipation of the 9th Int'l Conference on "EU, Turkey and the Kurds" 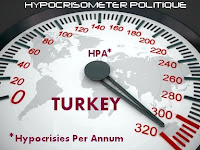 I hope you address the following questions at your 9th INTERNATIONAL CONFERENCE ON "EU, TURKEY AND THE KURDS" to be held later in 2012.

Charalambos Constantinides provides a truly excellent response to Amanda Paul, a journalist for AKP's, and thus the Turkey's state's, mouthpiece. Thank you Charalambos & congratulations! A must read! 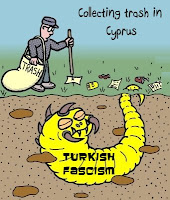 Some reporters underestimate the memory and the knowledge οf their readers. Amanda Paul, for example [a journalist for AKP's mouthpiece, Today's Zaman], has come up with the unfounded, arbitrary statement that during the intercommunal talks "Greek Cypriots have been going at a slower pace than the Turkish Cypriots want".

ROS-LEHTINEN: Time for Turkey to leave Cyprus in peace

Since its invasion of Cyprus in 1974, Turkey has claimed that it was acting as a protector and guarantor of the island’s security. But a closer examination of its actions on Cyprus indicates motivations of a very different character. Turkey’s invasion resulted in hundreds of thousands of Greek Cypriot refugees, who have been unable to return to their homes for almost 40 years. The international community has repeatedly condemned the illegal military occupation of Cyprus by Turkish troops. The United Nations Security Council has passed 75 resolutions calling for Turkey to allow Greek Cypriots to return to their homes and to withdraw its troops from Cyprus. Yet Turkey continues its occupation.

Why Islamism cannot be pluralistic - by Burak Bekdil

The shortcut answer is that Muslims can defend pluralism but political Islam will not -- unless, of course, for deception. Pluralistic thought has an avenue to survive in Islam the religion, but it does not have a space to breathe in Islam the political ideology. That is the heart of the matter in the political war between secular and non-secular Muslims; between Muslims who peacefully practice their faith and Islamists who violently and non-violently enforce their practices on others.
Read more »
Posted by ΚΧΚ on 3:32 PM 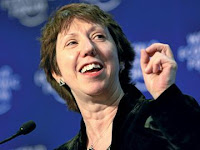 Email ThisBlogThis!Share to TwitterShare to FacebookShare to Pinterest
Categories: EU, Posts I liked

Responding to a number of inaccuracies and clear distortions of the truth in  Aphrodite’s Gift: Can Cypriot Gas Power a New Dialogue?  prepared by the International Crisis Group  Mr Charalambos Constantinides  addressed the following e-mail to ICG. An excellent read!

"
I have read with interest your above referenced report, but I was buffled by the repeated reference to the Greek Cypriot government when you should be referring to the Government of the Republic of Cyprus.

I am sure you know that the Greek Cypriots represent one of the two communities, be it the largest one (82%) living on the territory of the Republic of Cyprus, which comprises the whole of the island of Cyprus, save for the area covered by the two Sovereign British Bases.
Read more »
Posted by ΚΧΚ on 11:47 PM

Email ThisBlogThis!Share to TwitterShare to FacebookShare to Pinterest
Categories: Energy, Posts I liked 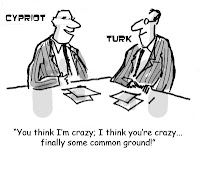 Both Republics, Turkey (RoT) and Cyprus (RoC) are in need for a constitutional overhaul, Aristotle's very definition of a 'revolution'. Both Republics are unitary states struggling with properly addressing the rights of their largest ethnic minority community. Both ethnic minorities constitute circa 20% of the respective populations. Both suffered, and in the case of Turkey still suffer, at the hands of the majority. In both, Turkey has the power to enforce/influence a solution. It seems to me these two problems should be studied in unison. No?
Posted by ΚΧΚ on 6:10 PM

No less for us than for the Kurds

That would be some statement, wouldn't it?

Nearly 38 years ago, Turkey illegally invaded the island of Cyprus, seizing 38% of its land and forcing hundreds of thousands of Cypriots from their homes. To this day, there are some 40,000 Turkish troops occupying the northern part of Cyprus. That’s more troops than the U.S. has in Iraq and almost half of the troops the U.S. has in Afghanistan. With tens of thousands of armed troops in an area about the size of Rhode Island, occupied Cyprus is one of the most highly militarized areas in the entire world.
Read more »
Posted by ΚΧΚ on 12:47 PM