I highly recommend you invest the approximately one hour necessary to watch this documentary on recent Cypriot history.

These thoughts of mine sprung from watching the video: 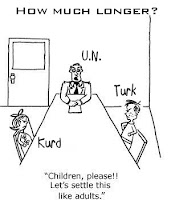 Mehmet Ali Birand 27/10/2011 "However many members the state of the Turkish Republic puts in jail, KCK fills the blanks immediately. There are two states in the region. One is the BDP-KCK formation; the other is the state of the Republic of Turkey. It is openly felt that there is a subtle race, a competition between these two powers. ... 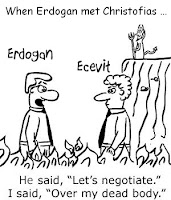 "Despite all that, Turkey, with its government and public, should never give up being cautious. Although there is no inclination or intention to implement a policy of hard power at the moment, even the seemingly most trivial and little tensions in international relations have the potential of turning into a disaster and spiraling out of control. There are many examples of this. It is very possible for a crisis between two countries to unexpectedly deteriorate into a conflict or a hot confrontation. What is more, an artificial crisis can be stirred up intentionally with the provocation of actors from inside and outside of the country. Therefore, we are of the view that Turkey is or should be rational enough not to carry its military activities to further levels under any circumstances. Additionally, we also believe that Turkey is or should be aware of the fact that tumbling into a military confrontation is bound to result in all the gains and advantages it has scored in recent years going down the drain." - Military activism in Turkish foreign policy: End of soft power approach? 23 October 2011, Sunday / RAMAZAN GÖZEN TODAY'S ZAMAN
Posted by ΚΧΚ on 9:27 AM

The ultimate win-win for Cyprus

"The PKK has shifted its focus to urban attacks against security forces and public employees under a plan to “render the state dysfunctional and hand over the administrative authority in the region to illegal structures under its control,” Gen. Özel said in written response to questions by the NTV news channel." - Army ‘won’t let PKK to seize local power’ Hurriyet Daily News 24 October 2011

How is Kurdish self-administration different than Turkish Cypriot self-segregation in the 1960s? Will they produce similar results? More importantly, should Turkey agree to adopt a 1960-like constitution, rendering its large ethnic minority a constitutional one?
Read more »
Posted by ΚΧΚ on 12:33 PM 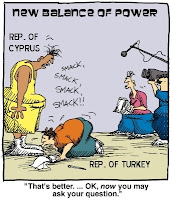 David , 23 October 2011 , 19:38 - This is a nightmare scenario for Turkey, Israel, Cyprus and Greece sharing in a gas and possible oil pipeline into the EU, the world's largest energy market. Not only that but there are strong indications that Egypt, with a population larger than Turkey and with huge gas and oil energy reserves of its own will eventually join in with the Cyprus pipeline. The regional influence, the influence within the EU and the billions of dollars generated annually by Cyprus, Greece and Israel from such a project will dwarf even the most grandiose dreams Turkey has of ME regional superiority over its neighbours.
Read more »
Posted by ΚΧΚ on 10:50 AM

The mother of all questions 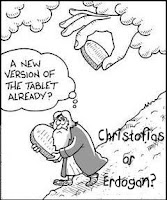 Having followed the Turkish press in English for the last two years or so nothing astonishes me more than the fact that no journalist addresses the obvious question in relation to their country's most urgent and difficult problem: "Why not try granting Kurds those rights we feel tCypriots must enjoy in Cyprus?".

The subject is a taboo and the journalist who dares introduce it into public discussion will be opening a Pandora's box with cataclysmic repercussions for both Turkey's role in Cyprus and its approach towards a solution of the so-called Kurdish issue, or more accurately Kurds' decades' old state terrorism issue. Both countries, RoT and RoC, are in need of a constitutional overhaul of their 1982 and 1960 charters, with the main issue being how to address the rights of their double-digit ethnic minorities.
Posted by ΚΧΚ on 12:50 PM

The defining moment for Cyprus is here. Will anyone speak? 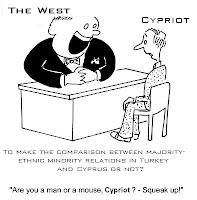 “A constitution that cannot solve the Kurdish issue in Turkey cannot be a new constitution. We are not here to start trouble. We want a solution, but no one should expect us to turn a blind eye to our most fundamental problems,” BDP co-chair Gültan Kışanak said yesterday.

The cross-party parliamentary commission tasked with drafting a new constitution for Turkey presents a unique opportunity for Cypriots to raise the similarities between the rights of the tCypriot minority community of Cyprus and those of Turkey's Kurds. The comparison will unveil the grandeur of the hypocrisy in the thinking of Turkey in Cyprus in the eyes of the international community. The west is ready to listen. Are we bright enough to recognize the defining moment and speak up? 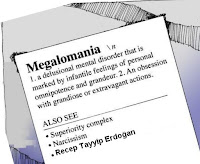 “The AK Party is not only a party of Turkey, it is a party of the world from Mogadishu to Bosnia and Herzegovina, from Damascus to Skopje, from Sana to Bishkek, from Abu Dhabi to Islamabad, from Gaza to Benghazi, from Pristina to the "Turkish Republic of Northern Cyprus". Where there is a victim in the world, the AK Party is there by his side. This is the kind of party we are” Recep Tayyip Erdoğan.

It's official! I envy tCypriots. The Prime Sinister's comments are spot on for the tCypriot victims who so perfectly fit the bill! And they play the part so darn well!

"Can We Write a New Democratic Constitution?" asks Nuray Mert of Hurriyet Daily News. The simple answer is 'NO'. Hers follows: "Last week, Prof. Burhan Kuzu of the ruling Justice and Development Party (AKP), who is the president of the parliament’s constitution committee, expressed his recent views on the new Constitution in an interview in the Vatan daily under the title of “God will punish those who will be an obstacle for the new constitution!” " Can We Write a New Democratic Constitution? October 16, 2011 Nuray Mert Hurriyet Daily News

Turk vs. Kurd on Al Jazeera


You must spend the 20 or so minutes to watch this. Pay attention to Kurds' need for community rights, for equality with the ethnic Turks of Turkey. In the end, you will come to understand Turkish über hypocrisy for the support of tCypriots' rights in Cyprus. 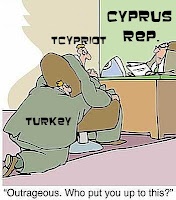 Why can't tCypriots allow themselves to question the soundness of the prime document of the Cyprus Republic, the 1960 constitution? Is it not a fact that the Constitution did not emanate from the free will of the Cyprus people but was imposed upon them by virtue of the London-Zurich agreements, which was the origin of feelings of discontent among the overwhelming majority of Cypriots? 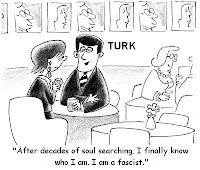 Cyprus in 10 minutes (in Greek only)

I STRONGLY suggest we stop allowing the luxury to tCypriots, hardly over 10% of Cypriot population, to think that they matter more than they do. We do them a disservice when we let them think that they have a say in defining Cyprus' future. Cyprus' future has been sealed as an integral part of the west and the European Union NO THANKS to them.

The Eyes of Zana

“As a matter of fact only one moment explained the whole story; when she [Leyla Zana] raised her head looking at the audience in Parliament after taking her oath. The expression in her eyes reflected her misery of being insulted and a looking down on those who insulted her by making her to read the oath. In my opinion, the Kurdish question is hidden in that moment of her look. She is a Kurd. They are forcing her to read the oath that emphasizes Turkishness. No one has the right to do that to anyone,” Altan [Ahmet Altan, the editor-in-chief of the Taraf daily] says.