How Civilizations Die (and Why Islam is Dying, Too) | David P. Goldman

David Goldman: "In the long term, Turkey is not a viable ally, because it is not a viable country. In the short term, Turkey has become another problem to be contained. ... Turkey has become a prospective enemy, and there are a number of things we might do, for example with the Kurds, to impose a high penalty for misbehavior. Covert action to support dissident movements, human rights initiatives, religious reforms, and so forth is an important component of managing instability, ... The United States must act like a superpower, rather than an NGO with a humanitarian agenda. That means standing by friends like Israel, preempting real threats like Iran, and punishing wayward allies like Turkey."

ROS-LEHTINEN: Time for Turkey to leave Cyprus in peace

Since its invasion of Cyprus in 1974, Turkey has claimed that it was acting as a protector and guarantor of the island’s security. But a closer examination of its actions on Cyprus indicates motivations of a very different character. Turkey’s invasion resulted in hundreds of thousands of Greek Cypriot refugees, who have been unable to return to their homes for almost 40 years. The international community has repeatedly condemned the illegal military occupation of Cyprus by Turkish troops. The United Nations Security Council has passed 75 resolutions calling for Turkey to allow Greek Cypriots to return to their homes and to withdraw its troops from Cyprus. Yet Turkey continues its occupation.

Speak to Turks in a language they understand! 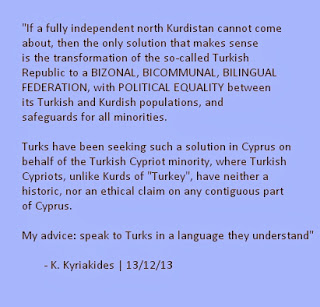