Before the week closes a fresh suicide bomb explosion hits Istiklal - the famous pedestrian high street in the heart of Istanbul (Constantinople). Known to most historically aware European travelers as Rue du Pera, Istiklal is frequented by scores of world class tourists. The German and other European governments have already advised their traveling citizens who found themselves in Istanbul to stay in their hotel rooms. Clearly, the security situation in western Turkey hits red alert. Terror rules supreme. Both Ankara and Istanbul city centres have become prime targets of attackers.

On the other hand the situation in the eastern provinces of the country is dreadful. Tens of thousands of repressed ethnic Kurds are forced to flee their ancestral homes in search for relative safety. The modus operandi, the goals, and the results of the Turkish Armed Forces (TAF) operations in Turkey’s Southeast targeted against the courageous Kurdish population are reminiscent of the Turkish ‘Peace Operation’ in Cyprus in July-August 1974.
Read more »
Posted by Κ. Χ. ΚΥΡΙΑΚΙΔΗΣ on 11:07 AM

The zones in Cyprus were the result of an illegal, unwarranted invasion. Cyprus never had zones in its history. Or if you prefer all zones in all of Cypriot history (which spans millenniums and did not start when Ottomans invaded in 1571) have been majority Christian and/or Greek or wholly Christian and/or Greek. Therefore federation is equivalent to accentuating 1960 injustice by superimposing magic zones which are majority owned by Christian refugees. This is why it will never be approved.

Furthermore, the precedent would be disastrous. What next? Muslims in Birmingham seeking their own zone? Kurds in Istanbul (a city 20 times the size of Cyprus)? I fail to see the logic behind rendering a monstrosity part of international law because of an unfortunate historical alliance between Kemalist fascism and the Anglo-Saxon world.

Makarios was right in 1963. A minority cannot demand privileges of the kind Turkish Cypriots demand. No European in their right mind would accept them for their minority. Neither will Cypriots. 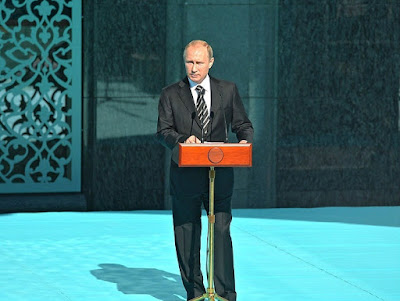 If Turkish President Recep Tayyip Erdoğan thought last November that by downing a Russian Su-24 bomber near the Turkish-Syrian border he could contain Vladimir Putin’s Middle Eastern ambitions, he is certainly regretting that now. An incensed Vladimir Putin vowed that Turkey would come to rue its actions. He warned that Russia would not settle its accounts with Turkey with mere economic sanctions, adding, “We know what we need to do.”

What Putin meant is becoming clear. Earlier this month, in what can only be described as a menacing signal to Ankara, the Syrian Kurdish Democratic Union Party (or PYD) formally opened a representative office in Moscow, its first in a foreign country. Meanwhile, inside Syria, the PYD’s armed wing has been using Russian arms and Russian air support to aggressively expand the amount of territory it controls along the Syrian-Turkish border. Ankara is alarmed, and rightly so. Despite possessing its own acronym, the PYD is a subsidiary of the Kurdistan Workers’ Party (Partiya Karkeren Kurdistane), or PKK, which is currently intensifying the insurgency it is waging in Turkey’s southeast. There, PKK activists have declared Kurdish self-rule and PKK fighters are holing up in cities, digging trenches and taking on Turkish security forces with everything from snipers and rocket propelled grenades to improvised explosive devices.