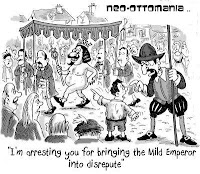 1960 was the year the Cyprus Republic was formed. How can it possibly relate to the plight of Kurds in Turkey?

Turkish Cypriots (herein TCs) never, in the over 3.200 uninterrupted documented Greek history of , constituted more than 18% of ’s population. In fact, Turks first set foot on in 1571.

In the 1950s the 82% Greek Cypriot majority (herein GCs) rose against the British colonizers, who had acquired in 1878, to seek self-determination and union of with . This is what the ethnic map of looked like in 1960 (census carried out by the British authorities of the time): 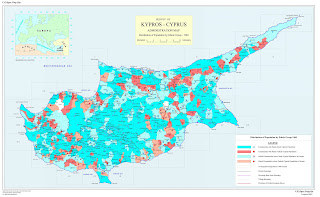 Britain exploited the TC community to maintain its stronghold. Turkey intervened as well in order to prevent Cyprus becoming part of Greece. The compromise was that Cyprus would instead become independent. Turkey, the self-proclaimed protector of the TC minority, insisted on a level of rights to be given to the TC minority, and threatened with military action unless her demands were met.

My aim herein is to illustrate what Turkey supported was an adequate level of rights for an 18% minority in 1960 for a unitary state. Then, if Turkey already back in 1960 insisted for such privileges for the TC minority, in another country, my hope is that you, Kurds, will demand to know why is she not willing to grant her own circa 20-25% Kurds similar rights?

Frankly, I’m flabbergasted that this analogy has not taken center stage yet. Its power is immense because no other minority struggle in the world can possibly be more relevant for the Kurds of Turkey. At home, Turkey sees things from a majority perspective and in Cyprus Turkey sees things from the minority’s perspective. The reason of course is none other than an unhealthy Turkish nationalism which leads to this blatantly obvious hypocrisy and double standards.


Let’s imagine what 1960 would mean for Kurds of Turkey!
(All points exist in the current Cypriot constitution)

Point 1
Imagine a Republic called ‘Turkey-Kurdistan’ with a Presidential system, much like the one the Turkish Prime Minister envisions, comprised of the two major communities, the Turkish Community and the Kurdish Community, and various other minorities.


Point 2
Imagine a Constitution where there is a Turkish President and a Kurdish Vice-President, both with the right of veto, a final veto, which can be exercised separately by each one of them against: [a] laws or decisions of the House of Representatives concerning foreign affairs, defense and security; and [b] decisions of the Council of Ministers concerning foreign affairs, defense and security; Imagine that Kurdish Vice-President cannot deputize for the President in case of his temporary absence or incapacity.

Point 3
Imagine that the official languages of the Republic are Turkish and Kurdish. All minorities to have the right to learn/speak their ethnic language, but they must learn one of the two official languages.

Point 4
Imagine a Republic which will have its own flag of neutral design and color, chosen jointly by the President and the Vice-President of the Republic. Here is how the new flag would look if we accepted the basic design of the Cypriot flag. 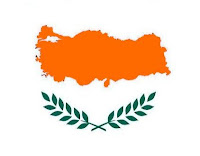 Point 5
Imagine every aspect of life across the Republic to be bilingual, in both Turkish and Kurdish, including passports, IDs, street signs, public building signs, government documents, state websites, etc.

Below is how Cypriot passports and signs look even today to help you imagine the corresponding in both the Turkish and Kurdish official languages:

Point 6
Imagine a new currency that is bilingual. This is how Cypriot currency looked before Cyprus joining the European Union.

Point 8
Imagine a Constitution which provides that the Security Forces must be composed of 70% Turks and 30% Kurds [1.7 times a minority population of 18%].

Point 9
Imagine a Constitution which provides that the Army must be composed of 60% Turks and 40% Kurds [2.2 times a minority population of 18%].

Point 10
Imagine the President of the House of Representatives, who must be a Turk, to be elected by the Turkish Members of the House and the Vice-President, who must be a Kurd, to be elected by the Kurdish Members. Imagine that Kurdish House Vice-President cannot deputize for the President in case of his temporary absence or incapacity.

Point 11
Imagine that the Constitution provides that any law imposing taxation and any law relating to Municipalities and any modification of the Electoral Law requires separate majorities of the Turkish and Kurdish Members of the House of Representatives taking part in the vote.

Point 12
Imagine a House of Representatives that always consists of 30% Kurds [1.7 times a minority population of 18%] and 70% Turks.

Imagine exercising your right of separate majorities not because you disagree with their provisions, nor because such Bills are discriminatory against your community, but for matters unconnected with the legislation at hand.

Point 13
Imagine a Constitution which provides that separate Municipalities shall be created all across Turkey, from Istanbul to Diyarbakir.

Point 14
Imagine a Constitution which separates the administration of Justice on the basis of communal criteria by providing that in all cases, civil and criminal, a Turk must be tried by a Turkish Judge, a Kurd by a Kurdish Judge and that cases, however trivial, involving both Turks and Kurds, must be tried by a mixed Court composed of Turkish and Kurdish Judges.

Point 15
Imagine a Constitution which provides that there shall be two Communal Chambers, one Turkish and one Kurdish, each having jurisdiction in matters of religion, education, cultural affairs and personal status over members of its respective community, as well as control over communal co-operative societies.

Point 16
Imagine that for a Turkey with a 25% Kurdish community [not 18%], Kurds should not enjoy 30% and 40% guaranteed representation in the various Republic’s institutions [House of Representatives, public administration, police, army, etc.], but 42% and 50% respectively!

Point 17
Imagine a Republic with three foreign guarantor Powers, a powerful friend of the Turkish community, a powerful friend of the Kurdish community, and a third with economic and strategic interests (e.g. Pakistan, Iran, EU), each with the right to take action with the sole aim of re-establishing the normal state of affairs in case of internal strife.

… how fascist it is for Turks to be demanding all this for an 18% minority of another country already back in 1960 and refusing Kurds even a small subset of these rights! Instead using unimaginable oppression, military oppression, police oppression, freedoms’ oppression, cultural oppression! I cannot imagine!

I cannot imagine how Turks deny these rights to the Kurds, fellow Muslims, who fought by their side for independence, to whom historical promises for recognition were made back in the 1920s, who constitute a whopping 25% of population, who have historical claims on a large part of the landmass called Turkey. I simply cannot imagine.

Turkish fascism in my country is exhibited most eloquently in this picture: 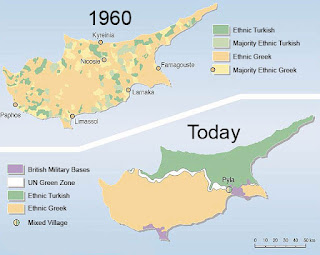 Turks today, and TCs, negotiate on the basis of a bi-zonal, bi-communal federation, using their leverage of 40.000 troops of the island that help maintain an ethnically divided island, the result of the ethnic cleansing that occurred in 1974. It is important to say that in 1974 the invasion happened even before a single TC had been harmed as a result of the coup instigated by Greece’s generals just five days earlier, which offered the perfect pretext for Turkey to perform this massive crime against Cyprus. The coup failed three days after the invasion. Turkey’s occupation persists 38 years later!

Turks prevent 33% of the population of Cyprus to live in their homes and to enjoy their properties, and pursue a criminal policy of ethnic character alteration of the occupied northern part by importing hundreds of thousands of unsuspected Turkish (and Kurdish) settlers. The population of TCs has diminished to a mere 80.000, or just 10% of legal Cypriot population. Turkey has been condemned by all international bodies.

Furthermore, and this is of paramount importance for the Kurds to appreciate, Turks’ and TCs’ negotiating position today is rooted in the 1960 constitution, which I hope helped you understand above. Any TC today will tell you “we deserve all those rights granted to us in 1960”. But when you mention Kurds to them, they say “Why do you talk about the Kurds? That’s Turkey’s problem”. Indeed, it is in a way, “but wait a minute, wasn’t it Turkey, TCs’ protector, that extorted those rights on behalf of the minority in the first place”?

Today Cyprus is a member of the European Union, the entire island officially but European law applies only to the free southern part, and about to preside of the European Council for the six month period commencing July 1st 2012.


Let us help each other! We would be fools not to.
The timing is perfect.