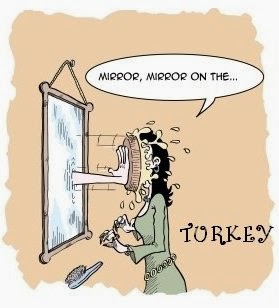 And what does the mirror say about "Turkey" 's 'Zero Problems w/ Neighbors' strategy?
Posted by ΚΧΚ on 6:38 PM 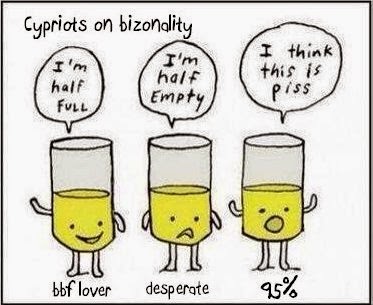 We could be best friends with Turks. If only they realized they have ZERO business either being or meddling in Cyprus. Turks have much bigger problems inside their own home, and I believe they should concentrate on those issues first and foremost. Because unless they can apply some of their Cyprus "wisdom", they so eagerly and unabashedly share with us, I 'fear' for both the unity and well being of the Republic of "Turkey".
Posted by ΚΧΚ on 1:24 AM 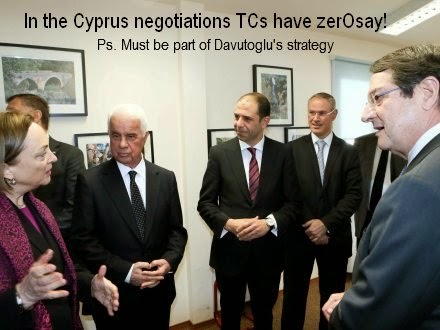 In the Cyprus negotiations the Turkish Cypriots have zerOsay. All part of professor Davutoglu's ZERO strategy.
Posted by ΚΧΚ on 10:03 PM

How many before it falls on its knees?

How many Turkish flags need to go down before the country itself falls apart? I bet the figure is in the single digits!

The EU knowingly and purposefully provides substantial direct financial assistance to settlements in occupied territory – in Turkish-occupied Northern Cyprus, that is.

The Elephant in the Cyprus Negotiations' Room

ELEPHANT IN THE ROOM: an obvious major problem or issue that people avoid discussing or acknowledging.
Posted by ΚΧΚ on 2:58 PM

British silence has been condemning Cyprus and Cypriots in the worst cultural disaster, still in the making since over 50 years ago. Yes, many are to blame for Cyprus' misfortunes, certainly Cypriots themselves, but no other has been more instrumental, more devious, more double-faced, more malevolent, and in the end more incompetent than the Brits. Their persistent sorry performance has led to talks for reaching a solution on the BBF basis, a bizonal apartheid concoction with no basis in history, demography, culture or ethical considerations. Yet they persist, by keeping silent, in the hope that that they can preserve their precious military bases. They and everyone else should know that for Cypriots the acronym BBF can only stand for: Bifaced British Fackup.
Posted by ΚΧΚ on 3:51 PM