Are you with us or against us? 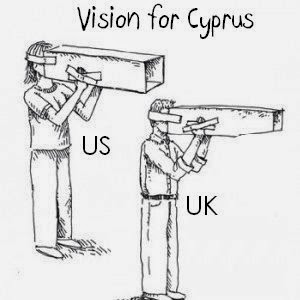 For Cyprus 1974 was a massive post WWII ethnic cleansing exercise, abetted by those world powers Cypriots share common values with. A massive colonization ongoing since which threatens to alter the millenniums-long, uninterrupted, recorded, Hellenic Christian character of the island. Just think of what it would mean for your own country. Cyprus's "friends" keep silent, while watching Cypriots struggling to decipher the semantic differences between 'ally' and 'strategic partner'. Let me help. A strategic partner is someone who forces the bully to back off. All others are at best neutral parties. In the case of the UK in particular it is a Trojan Horse.
The way I see it the UK and the USA have a choice to make: "Turkey" or Cyprus. And Cyprus too has a choice: between strategic jesters and those with the power and willingness, for own interests, to play the bully's game. The west should not take either Cypriots or its precious "S"BAs for granted. Time is running out for all. Things may get interesting relatively fast & out of control soon after. Perhaps that suits the United Treaty Organization. Cypriots must consider that possibility too, but in the end they won't have any choice but to play the game. From a Cypriot perspective it is as simple as it is for the world in the fight against terrorism: If you are not with us, then you are against us. As George Jackson said "Patience has its limits. Take it too far, and it's cowardice."
Posted by ΚΧΚ on 2:51 PM