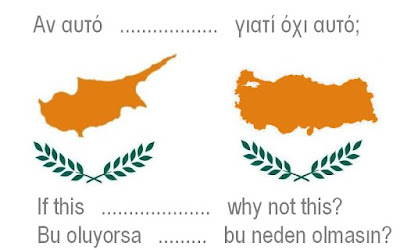 "Turkey", like Cyprus, also has a large ethnic community, the Kurds, whose population exceeds 20%. The Kurds of "Turkey" differ from Cyprus' Muslims in two significant ways. Not only are they the dominant majority for centuries in North Kurdistan, the eastern part of "Turkey", but they also shed blood for independence after being promised by the Turk Mustafa Kemal that Turks and Kurds would share the new state. Kurds have been persecuted ever since. Their children cannot even learn Kurdish in Turkish schools, let alone have a Kurdish education, a right Turks demanded for the Muslim Cypriots in 1960.

Muslim Cypriots on the other hand never constitued the majority in any district of Cyprus. Furthermore, not only did they not fight against the colonial power like Kurds did for Turks, but they joined it in the UK's fight against the historic Christian majority.

Ninety years after the establishment of the Turkish Republic Kurds are still dying and being persecuted by the ethnic Turks. They managed to enter parliament as a single political party for the first time ever in 2015, exceeding the 10% threshold. Today its leaders are (again) behind bars. Most of the Kurdish south east lies in ruins, not much different than Syria or Iraq. Everybody speaks of the Cyprus problem, yet nobody speaks (yet?) of the Turkey problem. You see, the western family does not want the dirt about its NATO member "Turkey" be spilled out in the open.

Today, Muslim Cypriots want to build on the ludicrous political and cultural privileges which were extorted on their behalf in 1960. Among other things, together with "Turkey" they demand the land they stole (note: this is the official term) from Christians to be legally recognized as their own. They want 50-50 power share in everything forgetting they are a minority in every respect on Cyprus, in numbers, in historical presence, in cultural footprint, in property ownership. They demand a rotational presidency between Christians and Muslims. And of course automatic membership into the EU, which would serve as "Turkey"'s back door to the Union since "Turkey"'s own membership prospects lie in ruins.

I am not sure about the king, but my eyesight is still good enough to spot a heckuva lot of nakedness in the halls of international diplomacy and the Turkish and Muslim Cypriot political elites.
Posted by Κ. Χ. ΚΥΡΙΑΚΙΔΗΣ on 12:06 PM