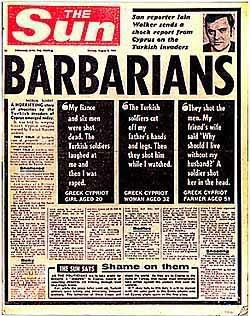 The aggression of Turkey towards the Republic of Cyprus continues unchecked and contrary to countless UN resolutions. Turkey’s blatant disregard for human rights, cultural heritage and international law knows no limits. And still the world looks on with sympathy but does nothing to confront this bully.

Appeasing a bully never works. Turkey will not change her spots and it is foolish to hope that she will. Successive Cypriot governments have tried to play the good guys out of fear of upsetting powerful Western allies. Those Western allies have in turn tried not to upset their presumed regional ally and member of Nato, Turkey.

Turkey has always been a threat to its indigenous minorities and near neighbours as demonstrated by successive pogroms and genocides against the Pontic Greeks, Asia Minor Greeks, Assyrians, Armenians, the Greeks of Cyprus, the Kurds and others. Who will be next? Is it sensible to allow Turkey to arm herself to the hilt with Russian support? Is it wise to let Turkey build a nuclear reactor so close to the Republic of Cyprus?

Allowing the Turks to get away with it in Cyprus sends a signal that international law doesn’t matter.

Strong economic sanctions are needed from the US, EU and UN to restrain this neighbourhood bully. Without them Turkey will continue to bring insecurity, instability and injustice to the Eastern Mediterranean.

The Cyprus issue can only be resolved by uniting the Republic of Cyprus on the basis of the rule of law, justice, democracy, self-determination and the 3Rs:

These are the messages that the West must now send to Turkey.